The Majority of the Mined Gold is Made into Jewellery 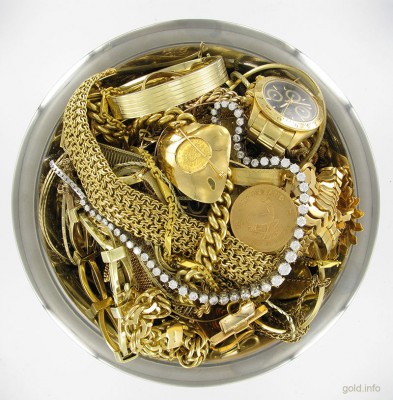 From the around 170,000 tonnes of gold that has been mined so far circa 79,000 tonnes have been used to make jewellery. That is about 51 percent of the total quantity worldwide. This figure underlines the importance gold has in the manufacture of jewellery. Human beings have never been able to escape the fascinating lustre of this yellow metal. Gold adorns human beings, enhances their external appearance, emphasises their aura and above all demonstrates their power and wealth. And, gold jewellery is timeless. It never goes out of fashion.

Gold was probably first mined and processed during the copper age in around 5,000 BC. Gold therefore belongs to one of the very first metals that human beings used. It was probably because gold was mined in a native state, in a pure form, the same as silver and platinum. Gold is easy to alloy and does not have an exceptionally high melting point. The first known gold jewellery objects are from the 4,000 BC and originate from today’s Lower Austria. From the period thereafter numerous grave finds are known, that have revealed gold jewellery such as rings, earrings, bangles or even hats made of gold. Particular attention should be paid to the famous gold jewellery from the so-called “Treasure of Priam”, which the archaeologist Heinrich Schliemann discovered and probably originates from Homer’s Troy. Everywhere in cultivated regions of the world the manufacture and wearing of gold jewellery became dominant – from the orient to present day Peru. Jewellery made from gold was however predominantly reserved for the wealthy, for dignitaries and priests. Only with the onset of wealth due to industrialisation could broad sections of the population afford gold jewellery.

The Importance of Gold Jewellery Over the Course of Time

Of course gold has been susceptible to customs and trends. Today rings, chains, bangles, brooches, cuff links, diadems and other types of gold jewellery are manufactured. During the middle ages gold rings in particular were prevalent, these were made for church dignitaries and hence fulfilled a sacred purpose. Generally the goldsmith’s craftsmanship has been influenced by the particular requirements of the people and the currently fashionable style. Later in the renaissance gold was above all an important accessory for the nobility and wealthy middle class citizens. Many portrait paintings from this period show the subjects sometimes adorned with exquisite examples of the goldsmith’s art.

Gold Jewellery and Gold Alloys – When Splendour Acquires a Colour

To make gold into jewellery, it requires the appropriate alloy. Pure fine gold would be too “soft” for everyday use and the surface would be susceptible to scratches. Gold alloys with purity levels of 333, 585, 750, 900 and 999 have become accepted. The number designates the gold content of the jewellery. A 333 piece of gold jewellery contains f.e. only 333 weight-proportions from a total of 1000 of pure gold. The rest is made up of added metals f.e. nickel or tin. In addition the alloys are differentiated, based on their colour, i.e. yellow, white, pale and red gold. The bright, sparkling yellow gold is very popular, being alloyed with silver and a small amount of copper. The melting point and surface tension of the alloy are influenced by the added metals f.e. zinc, platinum, nickel, or cadmium. The quantum of the additives results in the different colours and allows the gold jewellery to glisten, shimmer and glow in a very special way.

Every Piece of Jewellery has its Own History

Apart from the artistic qualities and craftsmanship one of the many secrets of gold jewellery is the intriguing question where the original material came from, from the gold mines of the ancient Romans, from the Incas or from gold found in Alaska? Because gold does not decay, it only changes its form or its owner – it never loses its magic and its individual history.