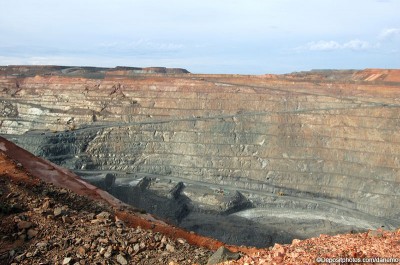 Gold mine in Australia

Gold is one of the most valuable and at the same time rarest metals on earth. It is estimated that up to now only 150,000 tonnes have been extracted worldwide. Indeed gold is present everywhere in the 16 kilometre thick Earth’s crust but, is only found in small quantities of ca. 5 grams per tonne. Difficult to find, difficult to extract – whoever tries to find gold must have patience and perseverance. Regions with the highest gold concentration on Earth are South Africa, North America and Australia. Depending on the way they were formed, the deposits are divided into a number of types.

A fundamental distinction of gold-bearing ground regions is the classification of primary and secondary deposits. Primary deposits are described as earth with gold deposits, where the available gold is classically embedded in quartz veins. The so-called “mountain gold” is transported there via hot hydrothermal fluids i.e. fluid, superheated solutions from the Earth’s core, that flow into rock crevices in the Earth’s crust and settle there. Mining is only economically viable with a concentration of more than 2.5 grams per tonne. Normally however, quartz seams only contain a gold concentration of one gram per tonne.

When primary gold deposits are eroded away by weather (temperature, wind, water) over millions of years, it is referred to as secondary deposits. The gold is flushed out of the rock and accumulates with other heavy minerals as fine gold dust or as small grains, the so-called “nuggets”, in the shallows of streams and rivers.  The so-called “placer gold” is formed. Gold resulting from weathering is also called “stream gold” or “gold soap”.

The so-called orogen deposits also belong to the primary gold deposits  some of the largest gold producing regions in the world belong to this type. These gold deposits lie at a depth between 1200 and 4500 metres and were created due to mountain formation. They exist in marine sediments (marine deposits) or metamorphic rock (created deep in the earth’s crust by high temperature and pressure). During the formation of mountains metamorphic fluids with temperatures between 250 and 400 degrees Celsius (“mesothermal”) that pressed quartz, gold and sulphide into rock fissures. The gold content of orogen gold deposits is normally very high and is not uncommon for concentrations of 10 grams per tonne. Important deposits of this type are found in the USA, Africa, Western Australia, Ghana and Brazil.

Epithermal deposits also belong to the primary gold deposits. Here the gold lies fairly close to the surface in a depth of up to 1500 metres. This type of gold deposit is mostly found in sedimentary and magmatic rock. The temperature of the hydrothermal fluids in magmatic rock are between 200 and 300 degrees Celsius (“epithermal”). Here the gold concentration lies between 1 and 10 grams of gold per tonne of rock. The most important deposits of this type are found in Papua New Guinea, New Zealand, Peru, Romania and Mexico.

A special type of gold deposit is the Witwatersrand goldmine in South Africa, which is by far the biggest gold field in the world. About 40,000 tonnes of gold have already been extracted from it. The Witwatersrand goldmine is identified as a so-called mixed type of primary and secondary gold deposits. Up to 25% of the extracted gold is typical of the historical evolution with gold being transported via hydrothermal fluids, that is to say of primary character. On the other hand about 75% of the extracted gold has typical characteristics of gold dust or nugget gold, which were created by weathering and fluid transport (water transport). The gold from this the world’s largest mine must be extracted from extreme depths. The gold mining galleries are in some cases up to 4000 metres under the surface. Therefore the worlds deepest goldmines are found in the Witwatersrand gold field.