The History and Methods of Gold Prospecting 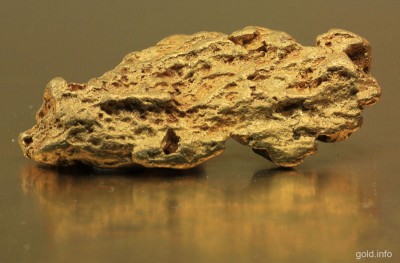 The dream of every gold prospector: a magnificent gold nugget

If we think about panning for gold, we think of the nostalgic scenes of adventure seeking prospectors on the Klondike river in America who, during the great gold rush at the end of the 19th century meticulously searched the river bed for gold nuggets in the hope of making a quick fortune. But even if it conjures up a romantic picture, prospecting is and always was a real back-breaking job and the prospectors in those days had to work hard for their nuggets.

Prospecting was already being carried out in antiquity at the time of the ancient Egyptians, Greeks and Romans, this is handed down to us in ancient scrolls. In the first instance gold panning is a method of searching for gold from secondary deposits in rivers and streams into which minute gold particles have been flushed from gold-bearing rocks due to erosion. Equipped with simple means, prospectors attempted to filter the so-called placer gold out of river sediment. The technique of prospecting has not really changed since antiquity.

Prospecting with the Gold Pan

Gold Prospecting with the Washing Trough

Using the same gold washing theory the “washing trough” or “gold trough” is used. Here the gold-sand mixture from the river flows through a trough with ridges on it’s base. This creates different current areas in the flowing water. Here also the gold settles on the bottom of the trough in front of the ridges. On the other hand the fine sand is washed over the ridges and back into the river by the running water.

Prospecting on Rivers – the Location is the Crucial Factor

As the saying goes: “gold lies where you find it,” However it should be: it can be found in many locations. At the end of the day only the yield is different. It is always dependant how much gold is present in the sandy river bed at the location. If you happen upon a favourable location, there could possibly be as much as five or more grammes per washed tonne of rock dust. At some less gold-bearing locations you could painstakingly wash 50 tonnes of river sand to ultimately get only one gramme of gold. With an average gold content in the Earth’s crust of about 0.004 grammes/tonne of rock this is not surprising.

Prospectors are potentially offered the chance of a high gold occurrence in so-called “alluvial deposits” or also “river placer”. Gold deposits are described as those where gold which was originally trapped in rocks and ore is separated by the weathering process and flushed out by rain and condensate into rivers and streams. Especially favourable locations to pan for gold on rivers are above all on the inside of river bends and all low-current and shallow locations.

Wherever you try your luck – whether on the Klondike River in the USA or on the banks of the River Rhine in Germany: gold prospecting requires a lot of endurance and patience with a simultaneous willingness to undertake heavy manual work. Gold prospecting is backbreaking work, and anyone who has moved a tonne of river sand through a gold pan knows how long it takes and how arduous it is.

Adventure and the Experience of Nature – Gold Prospecting as a Hobby

However, those who don’t want to get rich quickly by searching for gold or by prospecting, but rather their priority is to experience nature, then for them prospecting – when they take it easy – could be an interesting hobby, where one can really relax. And even when the hobby prospector doesn’t have any luck with gold – at the end of the day he will still have had a little adventure.